> How a Samurai sword (katana) is made

How a Samurai sword (katana) is made

Usually the blades of the Katanas are around 60-75 cm long, they have a more or less pronounced curve (sori) which simplifies the cutting, since a blade cuts well when is able to flow on the target and the curve supports this action. The sori is pronounced especially in the oldest models, given that they were used above all on horseback.

There are different types of curves (Sori), a particular and well known kind is the Bizen-Sori (called after the region and the school of the same name), which has a more pronounced curve near the handle.

A secondo type is the one used above all in the Yamashiro region and it has a quite constant curve along the blade of the samurai sword. Finally there is the most recent curve type (Sori), less pronounced than the other ones, in use starting from the Shinto era, it presents the most accentuated bending in the last part of the blade in order to simplify the extraction techniques.

Indeed when the wars ended the study of the fencing moved from military camps to gyms (Dojo) where the tiniest details of the duels were studied minutely. Among these duels we can find the Iai-Jitsu, a technique consisting in extracting the sword and hitting at the same time, and that was also defined "the art of concluding a fight before it began".

Besides the curve we have to consider the different geometry of the many models of katanas that are strictly related to the period of their creation. Here below are listed some of the main models that we can find in the YariNoHanzo catalogue:

The hon-zukuri swords are the most common ones, they are curved and they have a line that demarcates the tip (yokote) and a ridge, near the back, that follows all its length, called shinogi. The production of this kind of katanas began in the Heian era (794-1185).

The hira-zukuri swords are flat on both sides of the blade. They also don’t have neither the yokote nor the shinogi. This particular shape was very common on Tantos after the Heian era. Blades longer than 1.5 shaku (45 cm) are defined as o-hira-zukuri.

The katanas under this category are very similar to the hon-zukuri ones since they have a shinogi that goes through all the length of the blade up to the sword tip, but they don’t have a yokote that demarcates them. This kind of blades was very common on Tantos and Wakizashi of the Muromachi era (1336-1573).

Double edge blades can be both curved and linear, the shinogi, as in the shobu-zukuri ones, reaches the tip and they lack the yokote too. We can find this shape mainly in the middle of the Muromachi era (mid fifteenth century).

These swords have a symmetrical construction between a vertical axis and a double edge. We can find this type of blades even before the 700 A.C.

The katana has a centre of gravity that, in the most balanced models, is placed around 5-6 cm from the hand guard (Tsuba), while in the heaviest models around 10-13 cm from the hand guard. A forward counterbalance makes the cutting power stronger, since it allows the collection of more kinetic energy thanks to its greater inertia, but this also makes the sword less nimble and more difficult to use. That’s the reason why, in general, a backward counterbalance is more advisable.

The weight of a katana, with the hilt and the hand guard, usually is around 1 kg, but there are variations, even big ones, among the many models which range from 1,2 kg to 700 gr in some Shinto examples. During wartimes were built heavier katanas than during peacetimes, but anyway the samurai swords, as all the other swords, is designed to weigh the less possible because in the battle the most important thing is hitting the enemy and, above all, before all the others.

Asserting that medieval katanas (both Western ones and Oriental ones) were heavy and clumsy is just a myth to dispel. Actually this is absolutely false and even the bigger blades used by western knights during the Middle Ages weighed on average from 1.1 Kg to 1.7 Kg.

In 1500 some army corps were equipped with the famous Zweihander that weighed more than 2 Kg. but they were unique swords used only by a small number of very armoured knights with the only purpose to shear through the enemy spears. Building a solid katana is not difficult, the difficult part is building a blade strong and lightweight at the same time and at this the Japanese people stood out due to their refined metallurgic techniques thanks to which they transform the Nihonto katanas into extraordinary weapons.

The steel of a samurai sword forged according to the traditional procedures, observed closely, shows a more or less thick interlaced design of lines and dots that, all together, form the frame (Hada).

This is just an aesthetic collateral effect due to the many folds and beatings endured by the blade during the forging and it’s an indication of the existence of its layers. There are different kinds of frame (Hada) that are called Jitetsu (frame type). The experts use them to date a blade and, in some cases, to ascribe the katana to a specific school or to a particular forging master. The Hada, for its own nature, can’t be falsified and that’s why it’s employed, with other parameters, to establish the authenticity of a katana.

A very important thing to consider is that the steel of the sword is always smooth despite the granular appearance of the frame (Hada). This is quite important because if one tried to fake an authentic Hada (for example by etching) there would form some imperfections on the blade, easily recognizable, which are completely absent on the steel of a real samurai sword.

In order to observe and to evaluate the Hada of a katana in details, we have to remove the oil layer that covers it and only after cleaning the metal surface completely we can appreciate its smallest details. In the picture above there is an example of Hada (frame) the Jitetsu (frame type) of which is a mix of Itame and Masame (two technical terms which indicate a particular kind of frame that recalls the venations of a log with some straights parts and some others knobbly). The hilt of the samurai sword is called Koshirae and is composed of the Tsuka (handle), the Tsuba (hand guard) and the Habaki (a stiff copper stripe that wraps the blade up near the Tsuba). The Japanese people named every single little sections of their katanas, even the most insignificant ones. 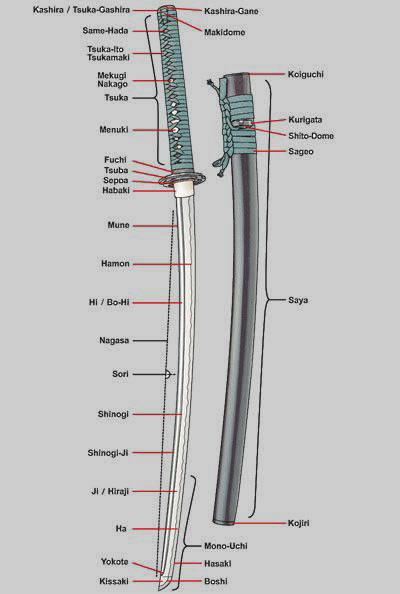 The Tsuba (hand guard) is basically an iron disk artistically decorated. Some exemplars of great value can cost as much as the sword. Often, in addition to the principal hole, we can find other two little holes on the sides. They were traditionally employed to keep a small multitasking knife (Kozuka) and a big pin (Kogai) that was probably used to fix the hair and prevent it from being an obstacle for the Samurai during the battle. 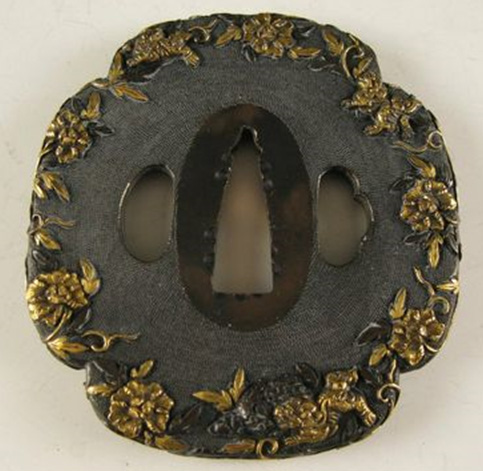 In general the more ancient Tsuba are the less elaborated. When Japan was finally unified under the Tokugawa Shogunate and the wars were no more on the agenda, the beauty and the quality of the katana decorations became a genuine form of status symbol. 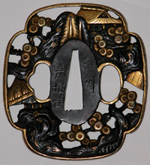 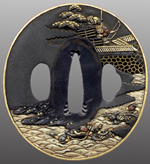 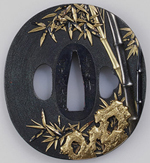 The Tsuka (handle) is customised for every single blade, it’s made of wood covered with ray skin (Same) which guarantees a very good grip. On it there is a rope, usually made of silk, (Tsuka-Ito) braided in a typical way. The katana handle is amazing, it softens the strokes and it guarantees an outstanding grip. In correspondence to the holes of the tang (Nakago), there are alike holes on the Tsuka in which bamboo linchpins are inserted (Mekugi) with the precise purpose to firmly fix the blade to the handle. The characteristic sinewy structure of the bamboo prevents the sword from “flying away” even in case of breakage because the broken linchpin would insinuate between the handle and the blade stopping it in its original position.

The Tsuka comes into contact with the Tsuba through a small metal cylinder artistically decorated, while on the opposite side we find a comparable cylinder closed at an end that works as a handle stopper. The whole is called Fuchi Kashira and is often finely decorated.

The Habaki (the copper stripe) has several purposes, it protects a real delicate part of the blade from the rust, it transmits to the handle a share of the shock wave making it weaker, it blocks the sword in the scabbard (Saya) and it fixes the hand guard to the handle. The Saya (the scabbard) is made of lacquered wood. Between the ray skin (Same) and the braided silk stripe (Tsuka Ito) there are two metal structures (Menuki) that, in addition to improve the grip, are useful to establish the right direction of the edge, using only the touch. The Menuki are often artistically decorated with floral subjects or are matched with the Fuchi Kashira subjects.

A multitasking rope of various lengths (Sageo) is usually rolled up around the scabbard. The Sageo is then fixed to it with a quite complex knot.

Also the Shirasaya (literally it means “white scabbard”), that is a scabbard and a wood handle, is usually customized for each blade. This rest mounting, quick to disassemble and to clean, is suitable for the blade preservation even for long periods of time when the katana is not used. Anyway some Samurai used and fought with katanas assembled this way in more than one occasion. According to tradition, after 200 years of duty, the samurai sword was put in its Shirasaya to rest and was preserved and handed down over time.

Generally the katana is worn into the belt (Obi) with the edge upwards. On the one hand this position preserves the edge of the blade from usury, on the other hand it eases its swift extraction.

HOW TO FORGE A TRADITIONAL SAMURAI SWORD (KATANA)